Hey Everyone :D
First Id like to congratulate Infinitemajesty on posting for the second time :D Hooray for me! :P
Anyways today's new item is the Flower Crown on Sale in Jam-Mart Clothing. 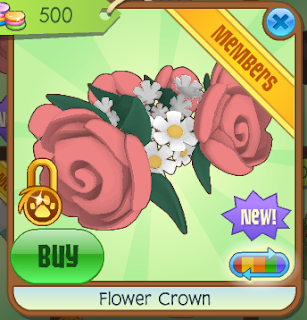 Wow it certainly looks very odd. But fashionable for the gals of Jamaa. Unfortunately half of the girls in Jamaa won't be able to wear it because it's for members. I just noticed that I put a hash-tag on the post title. O.O Believe me when I say that the hash-tag WAS unintentional. I'll just leave it.
Anyway's today was a very busy day in Jamaa. I say this simply because I, yes ME, I spotted a Kangaroo roaming around in Coral Canyons. :D I mean I have definitely heard of them but I never actually saw one in Jamaa.  Here's a pic. 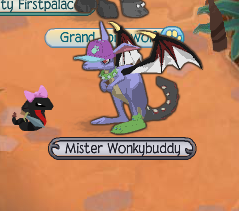 I wen't up to it and said... WHOA A KANGAROO! Then it told me: "get away you freak."
Later I became very blue. I will never be able to regain those moments of happiness.
In other news...A strange party sighting was found. For some reason and (I'll tell you the reason below the pic) AJHQ thought it would be fun to mislead jammers into believing that it was Christmas. For they added the seasonal Jamaaliday Jam to the party list.

Now this was real. I'm not kidding but,The real reason for AJHQ posting a Jamaaliday Jam so far away from the Jamaalidays is because... (drumroll)
IT'S CHRISTMAS IN JULY!
It happens in some places. Sometimes people just celebrate Christmas in July for no apparent reason. Probably because it's so warm in the summer and everyone misses the chill of the winter months inside the toaster oven we call Earth. Awe we still love ya' Earth even if you tend to overheat sometimes.
Also I'd like to inform you that I have received the white and red friendship bracelets I asked for :D. Unfortunately they weren't satisfying. Since they are so small. :I
Well that's about it for now! :D
Enjoy!
I have a signature now! :D But I can't decide so YOU choose :D

Posted by Infinitemajesty at 8:12 PM