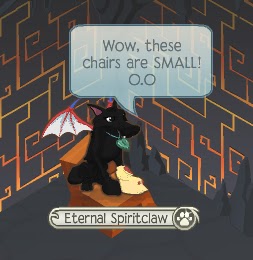 Image Copyright Animal Jam Times :P
Now a short introduction on Kinyonga. As narrated by Morgan Freeman. It seems Morgan Freeman couldn't make it to tonight's ceremony honoring Kinyonga. It will instead be written.
Kinyonga, another one of our avid jammers is probably one of the greatest well actually THE greatest friend a person could ever have. Kinyonga enjoys making people laugh, the word meep, and photography. She even plans on being a future zoologist! Now without further ado here are the questions.

1. What made you join AJ how did you learn about AJ?
Response:1. I found an ad to Animal Jam on the NG Kids website - it was of a koala dancing on a disco floor. My sister was right next to me, and I said it looked kind of...nowaday-ish, if you know what I mean? (That's the sort of stuff I don't like.) But I clicked it anyway and here I am! ^.^ My first account was actually Siliseal, but I made Kinyonga when I wanted to become a member. "Sili" means "seal" in Kiswahili so the username is a pretty odd one :p

2. What made you start your blog Animal Jam Times?
Response:2. I really can't remember. I think I was looking up if it was possible to become a member for free (already knowing the answer was "no") and I found a couple of AJ blogs that inspired me.

3. What does the word meep mean? XD
Response:3. "Meep" means nothing and everything at the same time - it can mean whatever you want!

4. You seem to have huge stockpiles of items, what is your secret? Coupons perhaps? lol
Response:4. There's not really a secret, lol. Just trading, I guess. Oh, and buying stuff when they go out for clearance. I remember my first "rare" was a clover blanket that I traded from Lokithorrrrr...I was chasing him all over Jamaa Township and The Lost Temple of Zios XD

5. Do you actually believe AJHQ is out to get you or doesn't like you since they always suspend you or such?
Response:5. Yes, I do! After I was de-suspended, I called them up about something. They answered, and you have to say your username and stuff. And when I said "Kinyonga - K, I, N, Y, O, N, G, A." the man said "Oh" in a kind of "Oh not YOU" way! :p

6. Have you ever though of being a comedian?  (some of the stuff you write is hilarious)
Response:6. XD How did you know? My sister keeps saying I should be one - when I was younger I wanted to be an actress...but now I think I'd like to be a zoologist and wildlife photographer ^.^

7. What is it like traveling to places such as Kenya?
Response:7. Amazing! Just amazing. We go there for Dad's work, so we don't really go on "safaris" and stuff, but it's still easier to see a wild zebra there than to see a wild deer back in England. My 2 favourite countries (in no order - and that I've been to) are: England and Kenya. <3

8. What is the most terrifying experience you ever had?
Response:8. Heck! Well, if it's the one when I was most scared, I'm afraid to say it was when a vervet monkey climbed into a tree right next to me, where I was reading a book. Monkeys are very unpredictable because if you just SMILE at them, they think you're being aggressive, plus they can carry rabies. Well, that was the scariest, I think...

10. Have you ever been to America or another country other than France, England, and Kenya? If so what did you think of it?
Response:10. Yes, I have - but not America, though I'd love to go to Brazil and Alaska! I think I've only been to three different countries for actual holidays, and not Dad's work: Denmark, Sweden and Morocco. I loved it in all of those places! <3

13. What is your favorite aspect about Animal Jam?
Response: 13. The nature side of things, plus the lovely people I've met! ^.^

I'm sure you agree with me when I say that Kinyonga is awesome! Not only that but it seems she has a bright future ahead of her! You go Kin! Applause please! XD
Support Kinyonga by visiting and following her blog HERE
Also by entering her contest HERE

Posted by Infinitemajesty at 10:44 AM