Hey Jammers! :D
Today's new item is the Spiked Wristband on sale in the Diamond Shop. 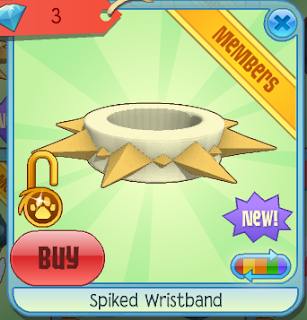 Sadly as you can see I can't afford it. Gem-to-diamond converter anyone?
Also I have never been a fan of spiked wristbands, I consider myself more of a glove person.
I also don't like the pointy spike, it looks too violent. I prefer short spiked of anything!

O.K. now for those of you who don't understand let me clear something up.....
Don't take this the wrong way its just a little lesson.
Lately I've been seeing a lot of people calling a few rares "betas." Now here's where the knowledge comes in. For an item to be recognized as a beta it has too....
1. Have been released before September 2010.
Why? Because September 2010 was the month in which AJ went out of beta testing and became an official game.
So if your item was released in September 2010-present it's not a beta. Unless designated as one like some of the prizes from the adventures.
Well that's about it for now.
Enjoy!~

Posted by Infinitemajesty at 9:16 AM